This work was first shown in 1992, initially at the Sculpture Center in NYC and then through several shows with the Denise Cade Gallery. The power of the body to display emotional intelligence was at the heart of these figures. They often mirrored important events happening in the world or my life. From this perspective, I wanted to portray the figures as though searching for a secure place from which to move forward. The sculptures are constructed from slabs of warm wax, formed as a shell, without molds or models. The wax is strengthened with layers of gauze and a final layer of pigmented, encaustic. For outdoor locations they have also been cast in bronze.

Below is an essay by Douglas Maxwell from 2001. 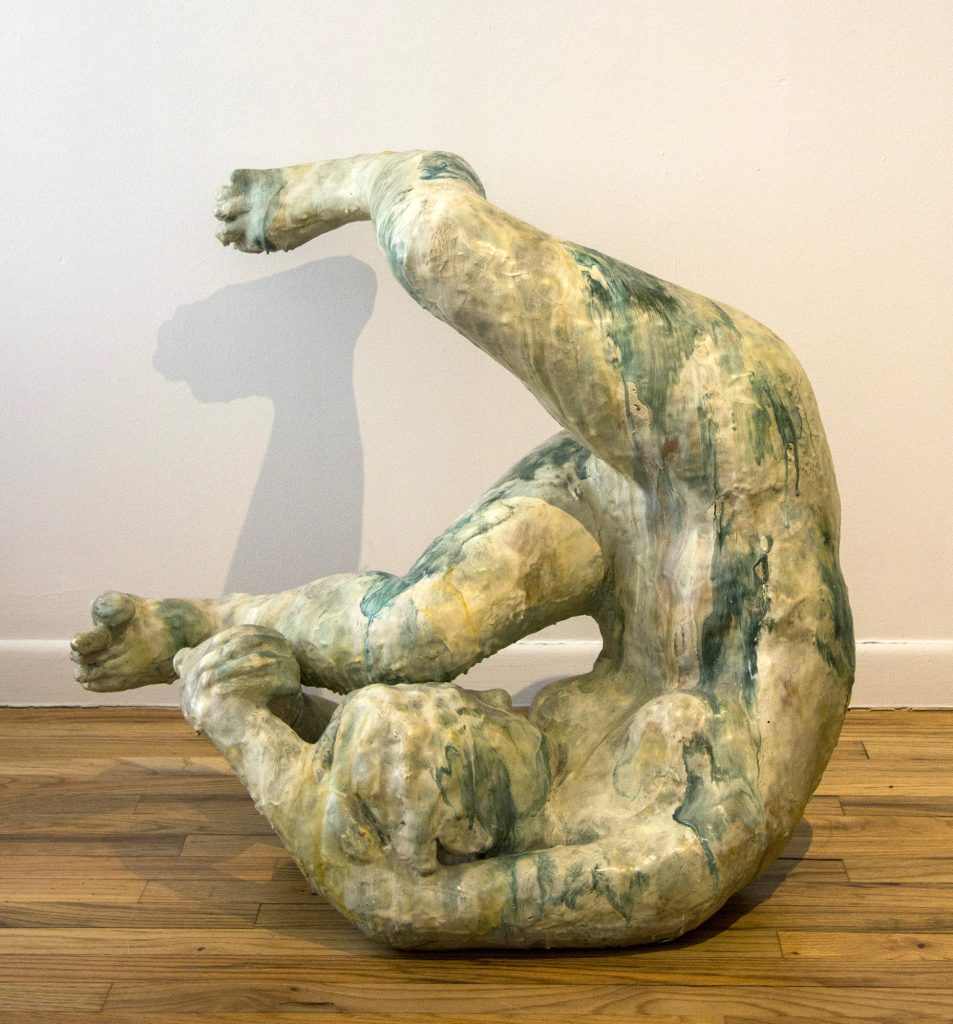 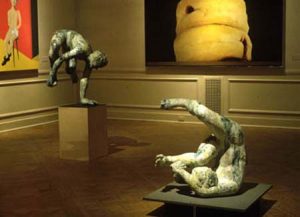 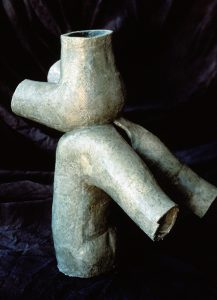 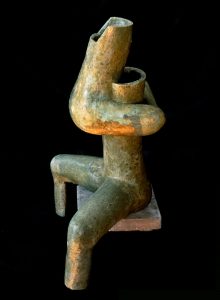 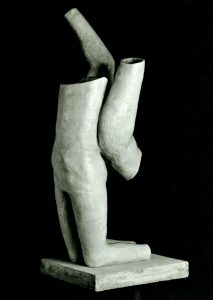 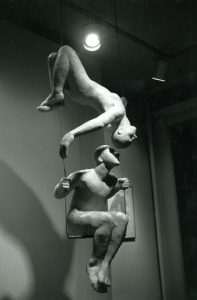 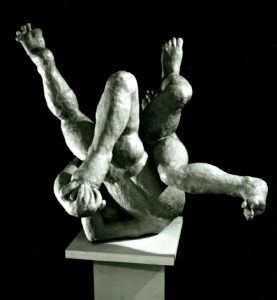 The Sky Contained Our Garden, 1998
Wax Original and Bronze 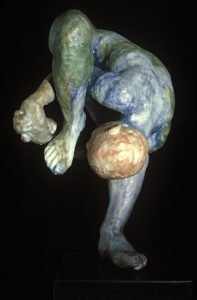 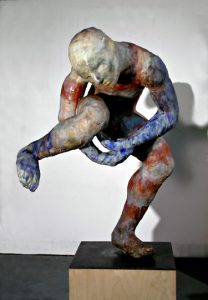 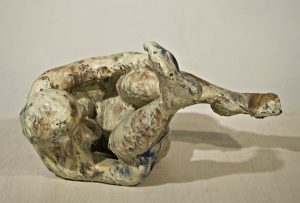 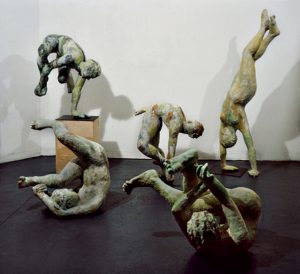 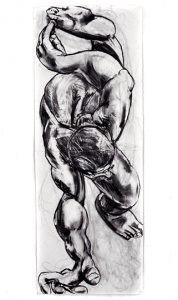 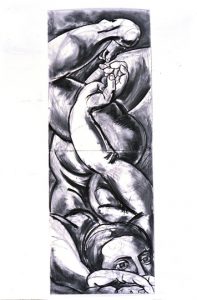 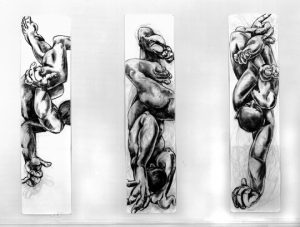 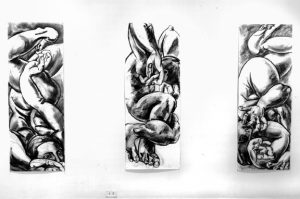 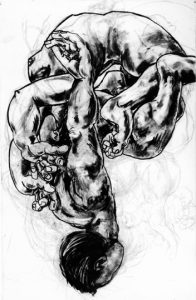 The Sky Contained Our Garden
1997 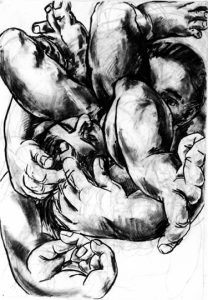 The Sky contained Our Garden
1997 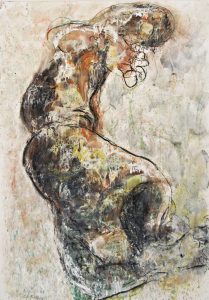 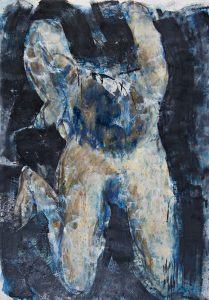 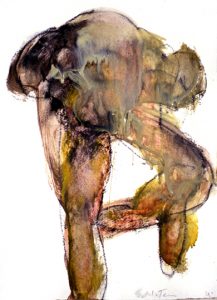 Essay by Douglass Maxwell from 2001 Catalog:

It is so interesting that day after day we find ourselves in unanticipated predicaments that cause us to experience a broad range of emotions from fear to anxiety to confusion to anger to elation to relief and beyond. Quite often predicaments pass without any dire consequences, but every so often the reality of life intercedes, and life hands us a traumatic event involving a loved one or ourselves. The event can be short or long, turn out well or ill or even final, but we still must come to grip with it emotionally and cope.

This life struggle seems to be at the core of Bruce Edelstein’s sculpture. The tension and unexpectedness of circumstance underscores the dramatic features of each of Edelstein’s figures and fives them their formal and emotional power. Figurative sculpture has a proud and everlasting heritage, but today only a few contemporary artists dare to take the risk of confronting this tradition. Edelstein not only utilizes traditional figural forms to identify with this rime-honored endeavor, but he works in traditional sculptural processes as well.

It is notable that Edelstein’s figures moving in space recall the period of Hellenism in their free flowing form, or the Baroque and Bernini in their extension into space and their overall movement. Yet, whereas the Greeks gave us sculptures of the gods, and Bernini gave us figures from mythology and history, Bruce Edelstein fives us ordinary figures with attributes familiar to us and the reality of our time, and therein lies the contemporary relevance of Edelstein’s work.

Edelstein’s forms appear to be in the midst of tumbling or gymnastics, but they hardly seem completely in control. Rather, Edelstein expresses a point of high drama; it appears as if almost anything might occur in the next breath. The pivotal moment the figures seem to be at, makes us pause and consider whether they may successfully complete the move or fail dismally to regain balance. The point of athletic action seems somewhat related to Degas’ ballet dancer sculptures, but Degas’ women signified the privileged voyeurism of the artist, and Edelstein’s figures capture a moment of agonizing spontaneity that reflects a more self-oriented, private quality of internal confrontation. His figures, with the torso and limbs contorted in flux, convey an uneasiness of the emotional states recalling our own life struggles, that the figures are familiar is not only the result of the relative realism of their proportion but also the relative realism of their precariousness.

The surface of the sculptures is as dramatic as the figures themselves. The sculptures are made with beeswax, which is built up as hollow walls and reinforces with gauze. Next, Edelstein opens up the forms and inserts an armature to further ole the shape overall. The surface color is created by a layering of encaustic and wax, which is fired by a torch that contributed to the colors “bleeding”, as in coming into existence. The stages of building the sculptures seem almost like a process of flaying or exposing the self. This very next second will lead to a result The pigment across the surface could be veins showing of the effect of bodily trauma from the turmoil of the event. In any case, the sum total effect is akin to harmonious chaos, the narrative action is for each viewer to imagine or recognize.

Bruce Edelstein has created a series of figural sculptures that have a universal resonance with which we all can identify. His ability to strike a chord every individual can identify with from the inside out as part of life’s experience gives a depth of meaning that is consistent with the great sculptures of the ages.